The Slow Release—Not the End of the World 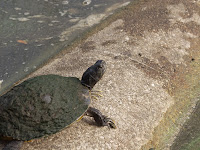 It used to be, and still mainly is, in traditional publishing, that you wanted a really strong book release.  My publishers like to see good pre-orders and a high sale volume for the first month of a book’s release.  They want books sold off bookstore shelves and few returns.
That’s mostly because, in the print tradition, if you didn’t have a strong start and your books hung out on bookstore shelves too long, the stores would quickly end up shipping those books back to the publisher to make room for other titles.

But with digital sales, we’re in it for the long haul.  Amazon will keep those books for sale—there are no returns.  Having a strong start is nice…but not vital.  It’s more important that we realize we’ve got a long time to keep ourselves and our books visible—that the online relationships and networking that we’re doing is going to continue for a very long time.
The first time I put a self-published book up in 2011, it took a while to get sales moving.  Luckily, I’d read enough blogs at the time to know that this was how it worked in the digital world.  It wasn’t as if I really promoted the release—I think I mentioned it on the blog.  I believe I made a Facebook mention (something along the lines of:  If you’ve enjoyed my other series, hope you’ll check out the new release in my Myrtle Clover series).
Slowly, though, it started to catch on.  What really accelerates sales is when Amazon’s algorithms (whatever they may be…and none of us really knows what they entail) start working in your favor.  I keep checking my book’s page to see when the “customers who bought this also bought_____” shows up. It’s a tremendous relief when it does, because my part is pretty much done at that point.  The sales escalate and I can start ignoring the sales and focus on writing my next book.
Each of my self-published books has had a slow start.  Some took a week or more to get going and others a little less than a week.  I know that Amazon sends emails to readers when I have a Penguin book release—some folks share the emails they receive with me.  But I don’t think they’ve ever emailed readers to let them know about a new self-published release of mine.  At least, no one has ever mentioned it.  Obviously…that would help.  But their algorithm works enough in my favor that I’m not too concerned about the lack of promo emails.  And the free book promo that I run for another book in the same series also helps with sales for the entire series.
Industry expert Jane Friedman’s new online magazine for writers, Scratch, had an interesting article recently in its preview issue:  “The Age of the Algorithm.”  The article states:
Author Joanna Penn writes, in How to Market a Book, “Launch sales are generally disappointing compared to what happens once the Amazon algorithms kick in and you get some traction around reviews and reputation.” Likewise, novelist Hugh Howey, who signed with a traditional publisher after succeeding on his own, said during an industry conference in May, “I don’t have a timeframe for a book to do well. I let readers be the one to discover it and tell everyone. They can do it with a level of excitement that’s more genuine than me. It’s a real slow burn.”  See more of the article here.
I’ve gotten to the point where I’m not restless while I wait for the book to catch on with readers.  But I have friends who have other strategies for a spike in sales at the start of a launch.  I’ve seen them:
Mention it on Facebook and Twitter (once or twice is definitely enough there).
Throw a Goodreads giveaway for print copies.
Send a newsletter to inform readers that they’ve had a release.
Some have signed up for services like Wattpad or Story Cartel to get reviews going.  The number of reviews a book has seems definitely linked into Amazon’s algorithm, although no one knows to what extent.
Blog tour.
Whatever your strategy, it should include writing that next book. All of the problems I’ve seen with writers who drive others nuts with over-promoting is tied to the fact that they’re putting all of their energy into that one book.  So much better to do some light promo while working on book two.  Because one thing seems clear…the more real estate you own on an online retailer like Amazon, the better it is for sales.
Thoughts about the longevity of book life at online retailers?  Have you ever had a book that was slow to start?  What kinds of things do you do to spur sales for a launched book?
Image: MorgueFile: helicopterjeff
Elizabeth Spann Craig at 5:40 AM
Share
‹
›
Home
View web version